Some of you who've followed me for a while will remember my quest to find out where my mother lived - and with whom - when she was evacuated with her boarding school in England, to Beaumaris, Wales, at the start of WWII. At first, we didn't even know what school she was at, but we followed the leads and confirmed that it was the Liverpool Blue Coat School (for orphans and fatherless children). Through the school, I found a woman who was a friend of Mom's. She and I have exchanged letters, and she even sent me the page from her autograph book that my mother had signed - in fact, Mom was the first person to sign this lady's book.

Then, today, my brother was going through a box of old stuff and discovered a food ration card with Mom's name on it ... AND ... her address in Beaumaris! Don't know where that box has been or why my brother has it or why we never knew about it before!

I went straight to Google Earth and was able to hone right in on the front door of the house that my mother lived in. It's just where it should be, based on her description in an essay she wrote in 1940, after she had returned to the U.S. Just as she described, it faces the Menai Strait and the green she spoke of playing on with her friends. I feel like Mom is guiding us toward knowing her story, but she is taking her time about it! Now that we have the address, I've written to the nice people in Beaumaris who helped me before, and asked if there is a way we can find out who lived at that address in 1939 - 1940. That would be the older woman my mother spoke of staying with.

Here is where she lived, second archway from the left in the closer-up picture: 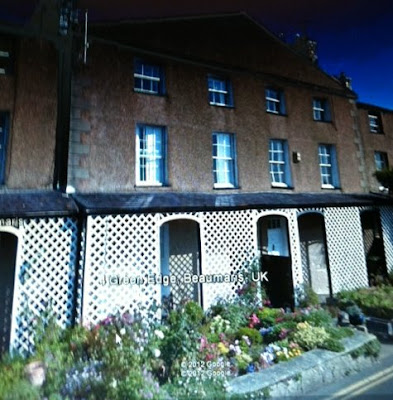 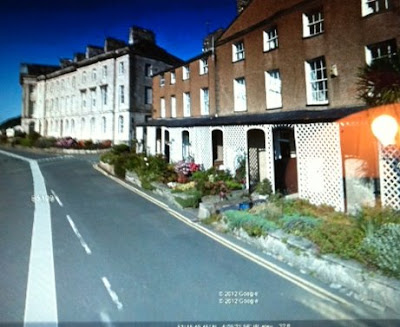 It's amazing what technology can do - I found the address on google earth and then took a picture of my computer screen with my iphone.

I also promised you pictures of dessert from our lunch yesterday, so here they are:

﻿
﻿
﻿﻿﻿﻿
﻿
﻿ Today I'm teaching the Restorative Yoga class at 11. The yoga teacher who has breast cancer is having her surgery at 12:30, so we'll send out lots of healing oms and prayers to her. You can add yours in too, if you feel so inclined. The more positive energy going her way, the better!

If I haven't visited your blog this week, I plan to catch up this weekend!
﻿﻿﻿﻿