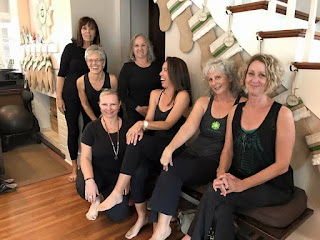 The woman seated beside me on the edge of the bench - the one sitting ladylike with her hands clasped, spine straight and wearing a demure smile, is Gwen. She passed away last Sunday from cancer at the age of 57.

This picture was taken a couple of years ago, when we had a professional photo shoot done at the yoga studio. Here, we were hanging out waiting for the photographer to finish taking shots in the classroom. I love this photo for so many reasons - because it shows us enjoying each other's company and because it shows our personalities outside of being teachers at the front of the classroom. I am trying to mimic Margit's classic photo pose, Margit and Pat are cracking up, Anna is wearing her beautiful photogenic smile, Heleen and Sharon in the back are just trying to behave, and Gwen is trying not to laugh.

Gwen was - is - one of my favorite people of all time. She is a devotional yogi, meaning that she studied in depth the philosophy and wisdom and spirituality of yoga, and lived and practiced it daily in her life. She is learned and wise and funny and really, really down-to-earth. I loved taking her workshops and I learned so much from her. There was so much more I wanted to ask, so much more I hoped to learn.

When I arrived in Punta Gorda in 2012, we were at the end of our time living and traveling in our RV. It was a tough time for us, because we had planned to continue that journey, but I wasn't doing well living without roots, and we were making the decision to stop and settle here. We were grieving the letting go of our dream.

I found The Yoga Sanctuary and hoped that I would be able to join the teaching staff, but it wasn't a certainty. It was December of 2012; the studio was decorated for Christmas, with stockings hung across the mantel and down the stair railing. Each stocking bore the name of one of the teachers or staff, and one of those names was Gwen. Gwen - Gwendolyn - was my mother's name. There are not so very many Gwens in the world, and when I saw that name on a stocking, it instantly comforted me and I began to think that perhaps this place would be a safe haven. Gwen was not on the regular teaching staff, so I probably didn't even meet her for some months after I joined the studio. But in those early months, it was the remembered comfort of seeing that name on a Christmas stocking that helped me start to feel at home.

For a time, long before I met her, Gwen lived at the Himalayan Institute and studied with her guru, Sri Swami Rama. In one of her workshops, Gwen talked about how her teacher became ill and she could no longer talk to him. She said, "I was so glad when he finally passed away, because then I could talk to him all the time!"

That resonated so much with me because of my experience with my mom. She had Alzheimer's, and for a long time, she was still physically here but mentally gone. When she passed away in 2011, I'd  had that same thought that Gwen expressed, "Thank goodness! Now I can talk to her again."

In yoga, we believe that death is like stepping into a different room. The physical person is no longer here for us to see and touch, but their essence, their spirit is here, there, everywhere. I am sad that I cannot see Gwen and hear her voice and her laugh, but she would not want any of us to be sad (though, to be clear, she did NOT want to leave us!). She would want me to think of it as she did when her guru passed - that now I can talk to her all the time. She may be sorry on that score - I plan to talk her ear off.

Gwen, I love you and am grateful for the privilege of having known you on this earthly plane.
11 comments:

I'm teaching a workshop called, "Yoga and the Creative Heart," in which we use yoga practices (yoga poses, meditation, breath, affirmations, chant and self-exploration) to identify and remove obstacles to manifesting our creative dreams and open ourselves to creative inspiration.

During our guided meditation this past week, I invited the students to offer up the open ended question/statement, "I am..." and allow for inner or divine guidance to respond. When the meditation ended, I asked them to write down anything that came up during the meditation that was interesting, helpful or surprising.

She talked about how, for most of her life, she was always a "part" of something - a couple, a family and so on, that made her whole. But most of those things she was a part of are in the past, and she realized that she now feels whole in herself.

We all thought this was a beautiful and interesting insight, and I found myself thinking about it later on.

Throughout our lives, we are part of many things: a family, a school, a club, a church, a community, a workplace, a partnership, a relationship and so on. So to a large degree, we tend to define ourselves in that way - a mother, a wife, an accountant, a writer, an Episcopalian, an American, a yoga teacher...a player among other players in the movies of our lives, collectively forming a whole made from separate parts.

But then, at some point, all of the things we have been a part of become incorporated into the totality of who we are, until, rather than we being a part of them, they become a part of us. The separation between ourselves and our experiences and relationships and roles is erased, and they are forever in us and part of us, fully and completely integrated.

Then, even if a situation changes or ends, all of what we are and were and experienced and felt and loved is in us, part of us, and we remain whole.