Wishing everyone a Happy Easter! Easter was/is my favorite holiday next to Christmas. When I was a kid, the Epicopal church we attended had a special children's service in the afternoon, at which we each got our own potted geranium to take home. I don't know why they did that, but I loved getting my flower!

My mother loved Easter too, and we particularly liked the Easter hymns. Our favorite was "Christ the Lord is Risen Today." Mom passed away seven (!) years ago tomorrow, and I still think of us belting out this hymn with gusto, particularly the "Ah-ah-ah-ah-ah-lay-ay-loo-oo-ya!"

When I was small we always had an Easter outfit and an Easter hat, and of course, white gloves for church. I don't have pictures of that, though I know there are some somewhere. I do however have this photo of me with a stuffed Easter Bunny. Honestly, I don't know what they were thinking - I look very skeptical of this rather creepy clown-faced rabbit! 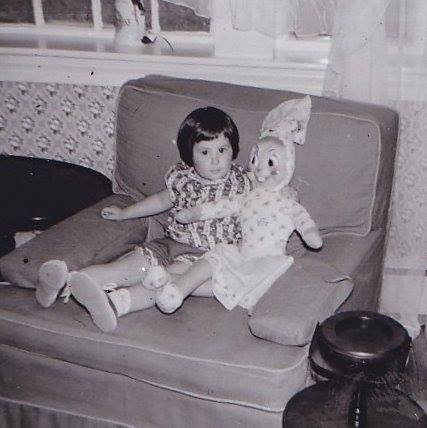 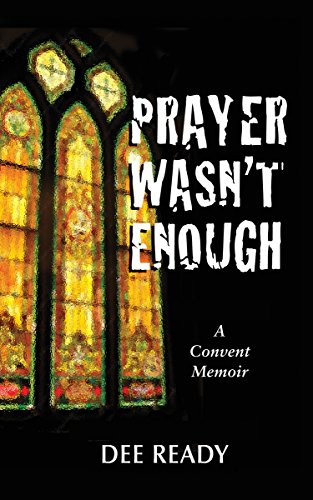 Dee Ready’s memoir, Prayer Wasn’t Enough, is a journey of self-discovery that allows glimpses into the secret life of nuns, a life that is revealed to be both less dreary and more fascinating that I could have imagined!

Several questions naturally arose as I began reading: Why would a modern-era, college-educated woman choose life as a nun? What is life as a nun really like? And why, after initially being so certain of her calling to this path, did she ultimately choose to leave it?

These questions are answered through an artfully-woven series of vignettes that take us behind the scenes in the convent and at the mission schools where Ready taught, or that offer insight into a dysfunctional childhood that played a greater role in her life choices than she at first understood. The answers are revealed gradually, creating a degree of mystery and suspense that surprised me – I was amazed at how invested I was in the story of a nun’s life!

The stories she shares offer the perfect cross-section of Ready's experiences and are alternatively joyful, sad, surprising, maddening, insightful and humorous. Her writing is clear and vivid; we feel her joy and hope as well as her confusion and despair. We relate to her humanity – the clumsiness and stubbornness that get her in trouble, her quest for perfection and her attachment to ideals that sometimes conflict with the “rules.” We cheer for her ingenuity and perseverance, for her kindness, and for her commitment to doing what she thinks is right. We relate too, to the self-doubt and self-criticism that cause her so much suffering, and we root for her to develop the same amount of compassion for herself that she so readily shows to others.

Despite its particularly rare set of circumstances, Ready’s story reflects universal aspects of every life, in which choices and mistakes are made; in which we try and sometimes succeed and often fail. By sharing her unique story, Ready connects to us all and shows us that it is exactly this imperfect journey that allows us to grow and learn, until eventually we come to know and accept who we really are and what it really means to be human.

Prayer Wasn't Enough is available in Kindle e-book and paperback from Amazon.com.

Click HERE to go to the page on Amazon.

It seems like just a minute ago that it was the start of the new year and I posted "Begin Anew," followed by a few posts inspired by the wisdom of Thich Nhat Hahn. Now it is March 17th, St. Patrick's Day, and the year 2018 is almost one-quarter over.

It's been a strange March - my friends and family up in New England have been slammed with one big snowstorm after another. Some of them love it, but most of them are getting pretty tired of it. Down here in Florida, we had cold spells in January that I loved, then in February it got too warm, too fast and I worried that we'd go straight into warm, humid weather. But for most of March we've been back in a cold spell, and I've been loving it. Our weather and the weather up north is more like February weather, but we're getting it in March.

On cold days, I miss New Englandy-things like having a fire in the fireplace. So I got a DVD of a fire in a fireplace. It sounds silly maybe, but it's actually pretty nice and it does the trick of giving me a "fireplace fix." My husband laughed at first when I told him I'd gotten it, but then I put it on while we had our morning coffee and he was just as mesmerized by it as I was.

Here, you can watch it too.


This year is evolving strangely, though I wonder if any year is not in its own way strange? What I'm thinking of when I say that is that many people I know are dealing with sad or scary situations. A dear friend's son died from a drug overdose. My friend who visited me in February had to leave early to be with her brother, who was diagnosed with brain tumors. She is still there with him as he goes through surgery and his plan of care is developed. My teacher spent eleven days at his father's bedside, helping him through the process of dying. I have two friends who are being treated for cancer. I just learned that the husband of one of my students passed away suddenly and unexpectedly, and today, I learned that another friend's husband passed away - also suddenly - after seeming to have recovered from an illness.

I don't mean to be a downer. It just seems like a lot of heartache and sadness - many battles being fought; some being won and some being lost. It is life, with all its ups and downs. Yoga teaches us to be with it all, and my teacher was a great example of this. He posted essays describing the experience of his father's journey to let go of this life and his writing was sad, moving, exhausting, beautiful, heartbreaking and uplifting. Life is all those things. The work of being human is to allow for it all, to know that we will be okay through it all. Not that we will be blase and pretend everything is fine; not that our hearts won't break, not that we won't be sad, even devastated. But that we know that we will find our way through it; that we will also know happiness and joy again. For most of us, that's a pretty big challenge.

And, seventeen people - most of them high school students, died in a violent shooting in a school here in Florida last month. March is also a verb, and on the 24th of March, students will lead the #MarchForOurLives in DC, all over the country and the world, protesting gun violence and asking for sensible changes to gun laws. We plan to march too. There are things we can change and things we can't. We have to accept the things we can't change, but this sure isn't one of them.