K is for Kuan Yin and Kilts

I really had a hard time feeling inspired for this K post, so I decided to just go with a few things that popped into my mind. It's not that there isn't plenty of inspiration out there, it's just that I didn't feel drawn to writing about any of it!

Kuan Yin is the Chinese goddess of compassion. You'll also see her name as Quan Yin and Guan Yin, but this is a K post, so.....

Her story is that she was first born a man, whose mission was to help lost souls be reborn into a better life on their way to enlightenment. But he drowned in anguish under the weight of their suffering, and in despair, shattered into a thousand pieces.

From his remains, he was reshaped into a woman, better equipped to bring compassion and mercy into the world. Kuan Yin has a thousand arms and eyes in the palms of each hand so that she can see people's suffering and reach out to them in comfort.

She is depicted as a calm, gentle, middle-aged woman who radiates serenity, and is known as the protector of sailors, merchants, those who are imprisoned, and women. 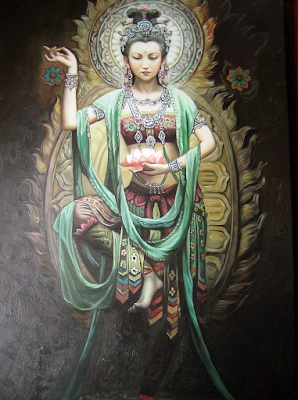 Okay, so now about kilts.

When I was growing up in New England in the 1960's - 1970's, kilts were popular. Beautiful, soft woolen plaids with the large gold pin to hold the flap in place. I thought they were fabulous. The Clan MacPherson, which marched in our town parades and played bagpipes, wore them.

Lately, we've enjoyed watching Men in Kilts, with two of the stars from Outlander (Sam Heughan and Graham McTavish) taking us on a road trip through Scotland and sharing its tradition and history. Ever since watching the series Shetland during the pandemic, we have been in love with Scotland. The show is interesting, funny and educational. And these guys look great in kilts, just sayin'.
Cheers! 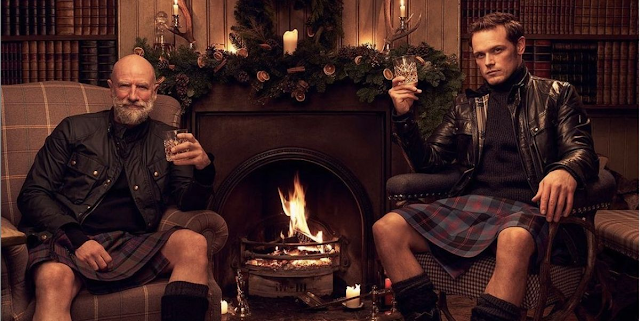