Today's inspiration at my Inspiring Thoughts and Pictures Blog comes from Sir Isaac Newton, with one of my photographs from Charleston, SC, taken last year. Enjoy the quote and photo HERE.
No comments:

New inspiration at Inspiring Thoughts and Pictures blog, in honor of Planet Earth
No comments:

Kick Up Your Heels

Life-affirming inspiration for a new week after a terrible one at: http://inspiringthoughtsandpictures.blogspot.com/
No comments:

I grew up in Andover, Massachusetts, about 30 miles north of Boston. As a kid, it was a big event for us to drive into the city, shop at Filene's Basement and Jordan Marsh, walk around the common and ride the Swan Boats. We'd walk right past Old North Church, where Paul Revere hung the lights warning of the British coming; past Mother Goose's grave.

Later, I'd take the bus with my friend and we'd shop or go to Red Sox games at Fenway Park. I was 14 or 15, and thought nothing of getting on the bus to Boston and taking the subway all over the city.

Boston is an old city by U.S. standards, and rich with diversity. It has a beautiful harbor. It's got MIT and Harvard. Well, that's Cambridge really, but we think of it all as Boston. That's how proud we are of Boston - everything within a 50 mile radius is pretty much referred to as "Boston." It's a center for education and culture and medical advancement.

Boston folks are tough: Hey, We've got Mark and Donnie Wahlberg for Pete's sake (Well, they might be from Dorchester, but it's all Boston to us :)

Boston folks are funny. We've got Denis Leary (Well, he may be from Worcester, but same rule applies).

They're smart: We've got Matt Damon and Ben Affleck. (They're from Cambridge too, but it's still Boston : )

Boston folks love to laugh, and their humor often bears an irony born from the struggles of immigrants making their way to a better life. Originally, the Irish (Southie) and the Italians (the North End); then later, Hispanics, Asians, Europeans, Middle Easteners, you name it. A true melting pot.

It hurts my heart that this city that I think of as mine has been attacked. But it makes me proud as I see how the hospitals handled the situation with incredible grace, how leadership hasn't hesitated to take steps to keep people safe, how law enforcement is mobilized. I can see the fierceness in their faces on TV - their absolute determination to protect their city and its people.

New Review for The Christmas Village

If you are visiting from the A to Z Challenge, I'm not in it this year, but have been popping around to support you all and enjoy your posts. Thanks for stopping by.

This wonderful new review for The Christmas Village just appeared on Amazon.com:

"The author came to visit our school and spoke with our 4th and 5th grade classes. As a parent volunteer, I was present during her presentations. She selected passages from the book to share with the children. As she was discussing how and why she wrote the passages, we all became hooked on the story. There was a mad dash to our school library to borrow the one copy of this book.
I purchased the printed copy of the book to read with my 8 year old - let's hope he does not give away the story when the author comes to visit again next year. We read the story together at night before bedtime. Each of us took turns reading out loud. My husband, who admittedly hates to read loved the story. While we were reading the book he kept telling that I had to let the author know how great the book is.
Not only is the story great, but the writing is vivid. The author's writing style has you caught up in the story, you feel like you are there. There is plenty of suspense in the story to make it hard to put the book down. The ending is wonderful. Another parent in the school asked me about this book her 4th grade daughter could not stop talking about. I loaned the girl my copy of the book. When we would see each other I would ask her if she was done because I wanted to know what she thought of the ending. When I saw her this week, she came running over to me excited to tell me she finished the book. She gave me a big hug and told me she loved the ending.
Initially I intended to read the book and donate it to our school library. I loved it so much that I changed my mind and decided to read it every year at Christmas. Well, after seeing my little friend so excited this week I had to donate my copy of the book to our school library. We still have several students on the waiting list. I will get another copy for our family."  ~ Maureen White

Here's the LINK to the review on Amazon.

Pop over to the INSPIRING THOUGHTS AND PICTURES BLOG for a new dose of inspiration - this time a quote from Helen Keller and one of my photos from Bar Harbor, Maine.
14 comments:

There is a canal that runs right alongside our building; the water is a mixture of salt and fresh. Further up, it opens into a small lake.

Since we've been here, three flocks of ducks have been enjoying this little watery oasis.

First there are what I think of as "regular ducks" with brown feathers.

Then are two types I'd never seen before. One kind are black with white middles - they look like saddle shoes - or Belted Galloway cows; we call them the Belted Galloway ducks.

The others are rather impressive, elegant ducks with long necks and white crowns.

At first the three kinds of ducks stayed separate from each other.

Each group converged in the morning in their own section of the lake -  we called it Morning Assemblies.

After a while, though, we noticed that there'd be some of the Belted Galloways floating near the Regular Ducks.

Overnight it seems that most of the ducks have decided to move on. We did not see them go, but there are only a few left.

This morning we saw a small group of Regular Ducks and a couple of Belted Galloways hanging out together, floating along and sticking together like they were a family. I don't think they know they are different kinds of ducks anymore.

It took some time, but it seems that after a while, they all got used to each other and decided it was safe to be friends. Sometimes, a little time is all it takes.

New mid-week inspiration over at my Inspiring Thoughts and Pictures Blog!

Pop over to RVPainter's Blog for his latest painting demo.

Have a great rest of the week!

Today's inspiration at my Inspiring Thoughts and Pictures Blog is from Louisa May Alcott.

Pop over for one quote and one photo to go with it. It'll only take a sec.

Thanks for coming by, and hope you have a great week.
No comments:

Happy Weekend everyone! Special hello to A to Z visitors - I'm not in the challenge this year, but coming around to visit and support you.

Pop over to my Inspiring Thoughts and Pictures BLOG for today's quote by William Wordsworth and beautiful photo (if I do say so myself) to go with it. Go on - it'll only take a sec!

If you missed it, I reviewed Julie Flanders book Polar Night in the previous post.

Have a great weekend!

Hi Everybody! And welcome to anyone visiting from the A to Z Challenge! I'm not in it this year, but I support you all. Thanks for coming by. While you're here, check out my review of Polar Night by Julie Flanders. And, make a quick stop over to my Inspiring Thoughts and Pictures Blog for an inspiring quote and photo to brighten your day.

Today I'm reviewing Julie Flanders first book, Polar Night. It's a paranormal thriller, and I'll tell you straight out that it's not a genre that I'm typically drawn to - sometimes, but not often. But that's okay, right? After all, some of you might say that a book about a boy who wishes to live in a Christmas village isn't usually your cup of tea either! 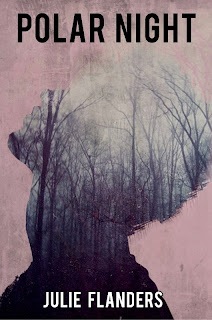 What's really fun, though, is when you read a book that  isn't something you think you'd normally be drawn to, and you end up pleasantly surprised because YOU LIKE IT. That's what happened to me with Polar Night.

I liked it. I really, really liked it.

Julie pulled me into the story quickly and I didn't want to stop reading. And she has created two characters that have tremendous appeal - our hero,  Danny Fitzpatrick, and our villain, Aleksei Nechayev.


Danny is a classic cop hero  - he's  from Chicago, self-exiled to Fairbanks, Alaska after events that have left him badly damaged emotionally. He's working cold cases, drinking too much and barely holding himself together. The great part about that is that it makes him a guy with nothing much to lose, and that of course, makes him willing to take risks. And, it's not that our villain, Aleksei is a likable bad boy, no, indeed. But he is definitely compelling.

A current missing woman case leads Danny to make a connection with the cold case he's working. Pretty soon, he's on to something BIG, but where it leads him is a whole lot bigger than he - or we - expected! That's all I'm going to say, because saying more would take away surprises, and Julie has done a great job with her surprises.

She's also vividly captured Alaskan winters and used that very effectively to create setting and mood. A former insane asylum in a remote Alaskan location ... well, it doesn't get much more unnerving than that.

It feels to me like Julie has left space for a sequel, or even a series. I think that Danny Fitzpatrick could develop into a classic cop hero along the lines of Michael Connelly's Harry Bosch. The potential for his  long-term redemption - or total defeat - is fun to contemplate. I don't know what Julie's plans are for him - if any, but I'm hoping we haven't heard the last of Danny Fitzpatrick.

Click here to go to Julie Flanders' Blog. She's participating in the April A to Z Challenge.

Click on the book cover above to go to Polar Night on Amazon.com: Or, click here:
POLAR NIGHT ON AMAZON