This meme has been around for a while: 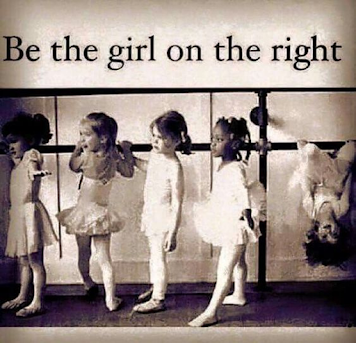 I love this picture and think it's hilarious. When this meme goes around Facebook, almost everyone claims to have been like that girl. But see those other four girls - the ones paying attention, being good, and wanting to do it right? I was one of them. And I definitely envy that girl on the right, and everyone who says they were, because she is definitely having more fun.
And then, I remember this....
When I was in Kindergarten, we had a jungle gym in the playground, over behind Stowe School. I loved playing on that thing, and spent all of recess on it.
It looked like this: 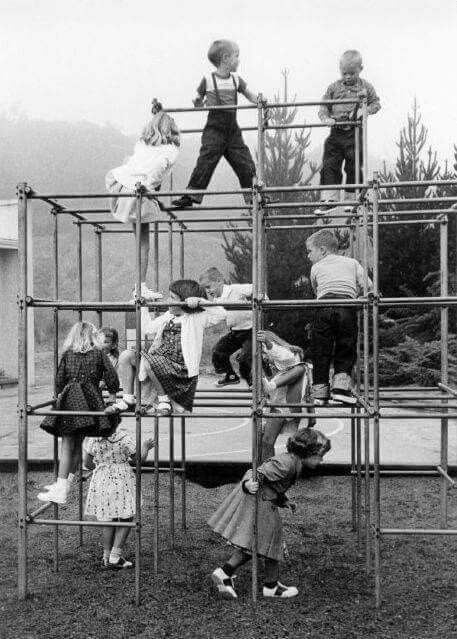 One day, I was dangling from the bars when I saw my beloved teacher hurrying toward me with a strange look on her face - a kind of combination worry and relief. Turns out, recess had ended and everyone had gone back inside. Everyone but me.
In my own little world, I hadn't even noticed. Hadn't noticed the cacaphony of children's shouts and laughter had stopped and the playground had gone completely quiet. Hadn't noticed them all run off back to our classroom just below. Hadn't noticed that I was all alone on the bars, all alone on the playground.
Teacher wasn't mad. I think she was relieved that I hadn't gone missing and was okay. I think she was amazed that I really just hadn't noticed that recess was over. I was amazed too. She was very kind. I didn't get in trouble.
And when I think of it now, I have to say that I feel strangely proud of this.
I don't really want to be that girl over on the right. She's funny, she's having fun, and I admire her free spirit. But you know she gets annoying after a while....
Still, I hope we all have SOME of her in us -  that ability to be free and funny and disobedient and completely in our own little worlds. And I like remembering my jungle gym moment and knowing that I do.

I'm a week late for the "I" blog post, but I have a good reason. Dick and I spent almost all of last week working on what I thought might be an IMPOSSIBLE task.

Because it's too hot and humid here for my neighborhood walks in summer, I decided to look into getting a Nordic Track treadmill. I thought they might be too expensive, but was surprised to find that a home model was affordable, especially with their 0% two year financing.

So I took the plunge and ordered one.

Problem is, with The Covid, they do not have their assemblers assembling before shipment and they can't send assemblers to your house to assemble it. The fellow who took my order over the phone assured me that it was pretty easy to do and that there are videos you can watch that help a lot. So, I took the plunge.

I guess a lot of people have been investing in home fitness equipment during the pandemic, so the treadmill was backordered and finally arrived end of day last Monday. The two delivery guys huffed and puffed and shoved the GIANT, 10,000 pound box into our guest room where the treadmill will live.

Just seeing that box made my heart sink. Then we opened it and this is what we saw: 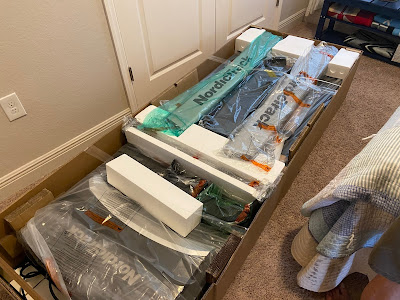 Honestly, I almost cried. Impossible, I thought. I can't possibly do this.
Over the years, Dick and I have assembled many, many things of varying sizes and degrees of complexity. He is very handy and did the bulk of it. My role was generally to stand by to "hold this" or "fetch that" or "steady this for me please."
The typical process was that he'd work on it by himself and I'd go and do something else until summoned to assist. I'd hear all sorts of banging and clanging sounds, along with strings of swear-words. Listening to this without knowing exactly what was happening, I'd get anxious and think things weren't going well. It was only later that I learned that despite how it sounded to me from the other room, he was having FUN!
Invariably there was a point when I would hear these words: "THIS IS IMPOSSIBLE!" Often there was another, quite expressive word before "impossible." I'd think uh-oh, we're in deep trouble. But also invariably, this was a turning point in the process.
Apparently these words are the key to opening some cosmic door, because the moment they are uttered, the tide turns and everything falls into place. It became a standing joke with us that until some completely exasperated person screams, "THIS IS IMPOSSIBLE!" the project is doomed. It is only by uttering these magic words that things will come together. Feel free to test this.
Because of his Parkinson's, Dick has lost muscle strength and dexterity, so this monster project was going to be mostly on me. This time, he was the holder and the fetcher - total role reversal. Though he is still the only one of us who knows the difference between a wrench and pliers, or basically, how to do stuff.
It took us a full two hours to unpack that box. The pieces are large and quite heavy.  I laid everything out neatly on the floor, and watched the video three times.
That was enough for day one. On day two, I attached the uprights, pulse bar and armrests. 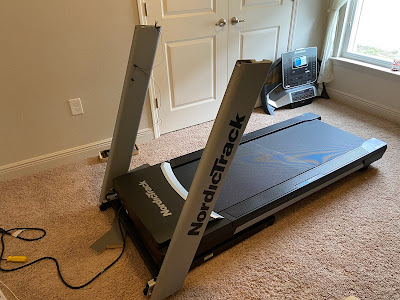 The large pieces went together easily using bolts and socket wrenches - I like those. But the smaller pieces, like the pulse bar and the arm rests, required me to  line several things up just perfectly and screw them together using teeny-tiny screws, from underneath, in a contorted position. At one point, I had to do Navasana - boat pose - for about three minutes per screw, because it was the only position that would allow me to see what I was doing and have the right angle on it.
Not only that, but the holes were not threaded - I had to create the threading by screwing in the screw. This took every ounce of my strength and a very long time. Inhale. Exhale, turn screw tiny bit. Inhale. Exhale, turn screw tiny bit. Good thing I practice yoga and know how to move on the exhalation....
It was around this point in time that I began to refer to my new toy as The Monster.
Day three was attaching the console - also quite heavy and awkward to position. This was the hardest part. NO, it did not just slide and snap into place like the video and instructions show. Dick steadied it and I must have tried TEN TIMES to get the runners to line up with the slots in the arm rests. I didn't want to push or pull too hard on it - after all, there's a computer in there!
THIS was the point at which I screamed, "THIS IS IMPOSSIBLE!" and believe me, I really, really meant it.
We took a break. I said, "Okay, now I've said it, so when we go back and try ONE MORE TIME, it's going to work."
And miracle of miracles, it did. 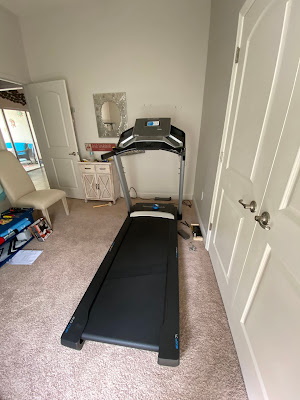 On Final Assembly Day, I attached the crossbar and the storage latch, which is what holds the treadmill in this upright position so that we can still get around in the guest bedroom. I can't believe it actually works. 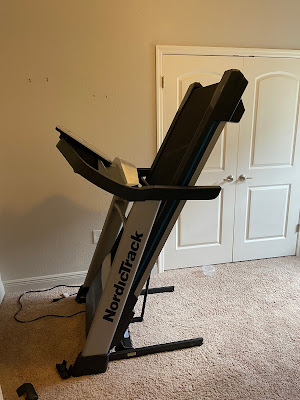 I waited several hours after that before turning the machine on, because I was terrified that after all that, it wouldn't work.
But when I summoned my courage to plug it in and fire it up, it did!
Now, we had a treadmill way back in the day, but it wasn't a COMPUTER like this one is. This thing knows my name and offered me guided workouts based on information I provided when I registered the product online.
The first workout I did was a 22 minute walk on a beach in St. Lucia, with a pretty lady named Stacie. The second one was a walk through a medieval walled-city in the south of France. The scenery is beautiful and they give you a lot of information about the places too.
So, there was a HAPPY ENDING. YAY! We worked on it Tuesday, Wednesday, Thursday, took Friday off and finished it Saturday. It took every ounce of my strength, stamina and determination,  plus Dick's experience and know-how, without which I would have taken many wrong turns. More than once, I really did think it would be IMPOSSIBLE to do ourselves. I figured, if that was the case, I'd just let it sit there until the pandemic was over and then pay someone any amount of money to come and finish it for me.
But it wasn't IMPOSSIBLE, and I am pretty amazed at what a 65-year-old woman with two trigger fingers (affects grip strength) and an 81-year-old man with Parkinson's could do.
We have, however, agreed that we will NEVER DO ANYTHING LIKE THIS AGAIN.
8 comments: