This week, I have to draw my inspiration from the letter F. Well, I don't have to, but that's the challenge I've given myself. Nothing was coming to me, though occasionally the word fog did come to mind.

I thought of a number of other F words (hey - I'm from Massachusetts and F words are about 90% of our vocabulary), but none of them felt like anything I really wanted to delve into. Polite F words like forgiveness , family, friendship or fortitude seemed too big. Ugh - who wants to delve into all that bigness?

There was a layer of fog hanging over the pond when I got up this morning. Ahhhh, I thought, a message from the universe. Fog must be the word.

I took a picture, just so you wouldn't think I made it up about about the fog. 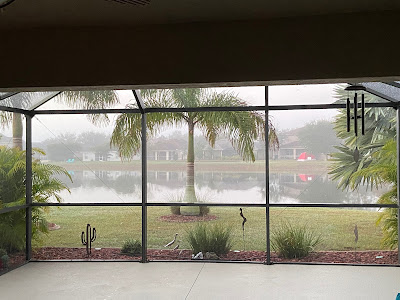 Despite the universe's nudge, I didn't feel inspired to write about fog. My brain felt too tired. That's when another F word came to mind: funk. I think I'm in a little February funk. Last week, I was all bouncy and full of inspiration. I worked on a poem, sent off an article query and taught a workshop. But this week, I got nuthin'. Maybe it's the weather, which suddenly turned warm and humid. I liked our cold spells better.

Maybe I used all my inspiration last week and need to let the well fill back up. Geez, even that metaphor was dull....

The fog was gone by 9 a.m. I went for a walk, trimmed the Aricas and vacuumed the lanai. All that made me feel less funky, a lot hungry and wanting a nap.

So, there it is., a not very fabulous F post. In an effort to insert a smidge of insight, I'll go with this: It's okay to be in a fog or a funk and not very inspired sometimes. It'll pass.