This week I'm taking part in the
KILLER CHARACTERS BLOGFEST
It's the brainchild of delightful bloggers Deana Barnhart and E. R. King. You can pop on over to their blogs to get the list of other participants and read their posts.
Now THIS is the one I've been waiting for!
Our assignment today is to present our
FAVORITE ANTAGONIST
from literature.

So let me introduce her ...
She's cold, calculating and controlling.
She's manipulative and mean,
but she disguises it beneath a smooth, poreless mask
of quiet, unruffled calm.

So here she is, ladies and gentlemen ...
Everybody's favorite sociopath ...
The woman voted
"Most Likely to Volunteer to be Dr. Mengele's Assistant " 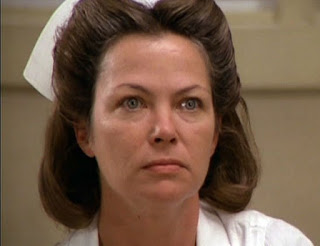 Nurse Rached
from
One Flew Over the Cuckoo's Nest
by
Ken Kesey (1962)
Nurse Rached is the head nurse at a mental institution in Salem, Oregon, where she maintains absolute control over the residents. She rewards total obedience and cruelly punishes any behavior that could threaten the perfect predicability of her realm. Nurse Rached is a quiet tyrant, a sick sociopath hidden behind glassy skin and a crisply-sprayed-to-perfection pageboy hairdo.

Enter Randle McMurphy, a relatively sane inmate with a rebellious streak. McMurphy tries to bring fun and humanity to the ward, and in doing so, threatens Nurse Rached's dictatorship. She retaliates with small punishments at first, but when McMurphy persists, Nurse Rached ups the ante. She gives McMurphy shock therapy to weaken him. But McMurphy is a fighter and his efforts have awakened rebellion in the other, previously docile inmates. Sensing that her enemy's strength is growing despite her efforts to diminish him, Nurse Rached uses the ultimate weapon in her arsenal - she has McMurphy lobotomized.

When I first started this blog, I was completing yoga teacher training and used it as a place where I could write about yoga philosophy. It was really just for me - I had no idea if anyone would find it or read it.
I am also a writer, and have written and published three books - two are middle grade novels and the third is a book about RVing that I co-wrote with my husband. When my books were published, this blog became a place to promote them. But as necessary as book promotion is for an author, I miss just writing about what interests me - life, with all its suffering and all its joy. We all struggle and we all want to be happy. I want to write about that again.
So, I've created a separate blog where you can find information about my books, and I'm returning this blog to its roots. Here, I am writing for me. And I hope that, if you happen by here, what I write may resonate for you too. A link to my author website can be found below. Thanks for stopping by!

On my 61st birthday. Never Growing Up!

Link to My Author Blog

Click HERE to go to my author website, Melissa Ann Goodwin, Author of The Christmas Village and Return to Canterbury

My husband, J.R. Secor is an artist who paints in acrylic with brush and palette knife. You can view his work and demos over at his RVPainter Blog.