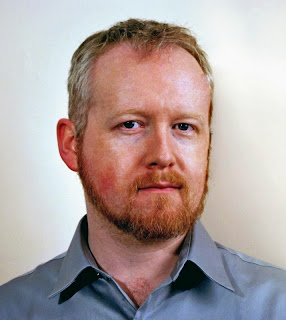 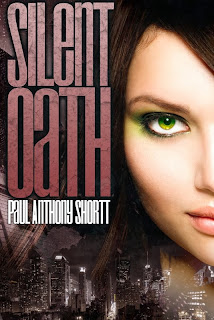 which is the sequel to Locked Within. He's also the father of adorable twin girls, an avid gamer and a blogger. He's visiting today to let us know about Silent Oath and to share a little bit about his life as a writer and his life beyond writing.

I hope you'll enjoying visiting with Paul today and will leave a comment to let him know you stopped by. Thanks for coming!

First, a little about Silent Oath:

Hope has returned to New York City. Nathan Shepherd leads a small band of dedicated fighters against the Council of Chains and the city's supernatural masters. But it's not enough. Because from the shadows of Nathan's former lives comes an old enemy, one who knows terrible secrets that Nathan has not yet remembered, secrets that could undo everything he has fought for.

Nathan's only chance to uncover the memories of his previous existence, and to conquer these new forces of evil, lies in Elena DeSantis, a woman he has fought beside in past lifetimes. A woman he has loved.Together, Nathan and Elena are the only future the city has.

AND NOW, LET'S FIND OUT MORE ABOUT PAUL

ME: Paul, you seem to be a very prolific writer. How often do you write and for how long?

PAUL:  I write every day. My standard schedule is to write during my lunch hour in work, and early on weekend mornings while my daughters are playing in their play chairs or napping. Beyond that, often if we’re not doing anything in particular on a weekend afternoon, my wife will watch the girls while I get some extra work done for an hour.


ME: I've also seen you say you are a "gamer" - what exactly does that mean?


One of the players, referred to as the game master, plays the role of all the other characters in the game and comes up with a storyline, or adventure, for the others to play through. There are rules to adjudicate things like combat or tests of skill, typically used to heighten the drama and add an element of uncertainty to the game.


It’s a hobby I’ve been involved with since I was about 14, and to this day many of my closest friends are also gamers.


ME: Does gaming a role in your writing?

PAUL:  Definitely. I’m often the game master in our regular group, and it gives me an opportunity to test out story and character ideas before I include them in a book. Dorian, one of the antagonists of Locked Within and Silent Oath, is actually inspired by the villain from a game I ran based on the Buffy The Vampire Slayer TV show.


ME: Do you have other employment besides writing - if so, what do you do?

PAUL: I work in office admin and customer services. I’m the team supervisor so I have a lot of responsibilities, but thankfully this means I sit at a desk with a computer, so once 1 o’clock comes around I can get straight into writing.


ME: I love seeing the pictures of your twins on Facebook. I can only imagine that your ability to find time to write has changed since having twin girls, yet you seem to still always be writing. How are you managing the balance?

PAUL: Certainly. Before I could get up early on a Saturday or Sunday and write for hours while my wife slept. Now I get up, and I have to get breakfast ready for the girls. Also, while the girls now have a set bedtime and are usually very good at going to sleep, since they’re teething now they can sometimes have trouble settling down. As my wife has somewhat limited mobility and is in her third trimester with the new baby, I have to go upstairs to check on them if they start crying. It’s hectic and tiring at times, but one smile from my girls and it’s all worth it.

Also, not that this should make any sense, but now that I have to divide my time so much, I actually feel like I’m more productive when it comes to writing.

A child at heart who turned to writing and role playing games when there simply weren't enough action figures to play out the stories he wanted, Paul Anthony Shortt has been writing all his life. Growing up surrounded by music, film and theatre gave him a deep love of all forms of storytelling, each teaching him something new he could use. When not playing with the people in his head, he enjoys cooking and regular meet-ups with his gaming group.

Paul lives in Ireland with his wife Jen and their dogs, Pepper and Jasper. Their first child, Conor William Henry Shortt, was born on July 11th, 2011. He passed away three days later, but brought love and joy into their lives and those of their friends. The following year, Jen gave birth to twins, Amy and Erica, and is now expecting their fourth child.
Paul's first novel, Locked Within, was released on November 6th, 2012, by WiDo Publishing. Silent Oath is the second book in this urban fantasy trilogy.

HERE ARE THE LINKS TO PAUL'S BLOG AND HIS BOOKS: